In this post I explain how to create a .NET Core 2.0 console application which reads, and writes, data from MySQL, and uses Entity Framework Core, and migrations, in order to persist data and manage the DB schema. Furthermore I will show how to use Docker to be able to develop the application independently by the chosen environment.

In order to highlight the needed steps, I split the post in this way: 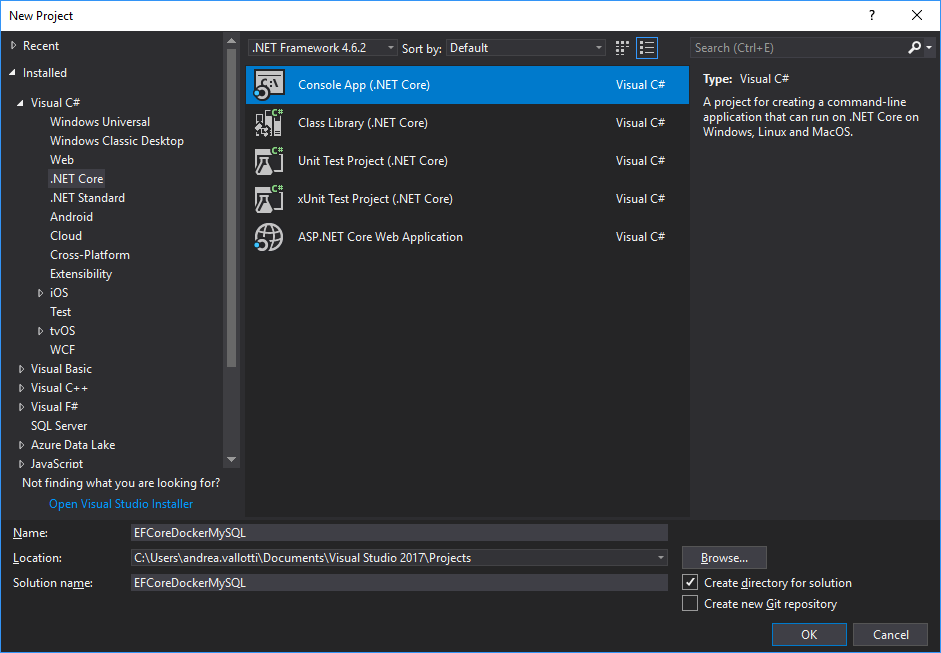 Then I enabled the Docker support by right clicking on the project, selecting Add -> Docker Support, and choosing Linux ad target OS. 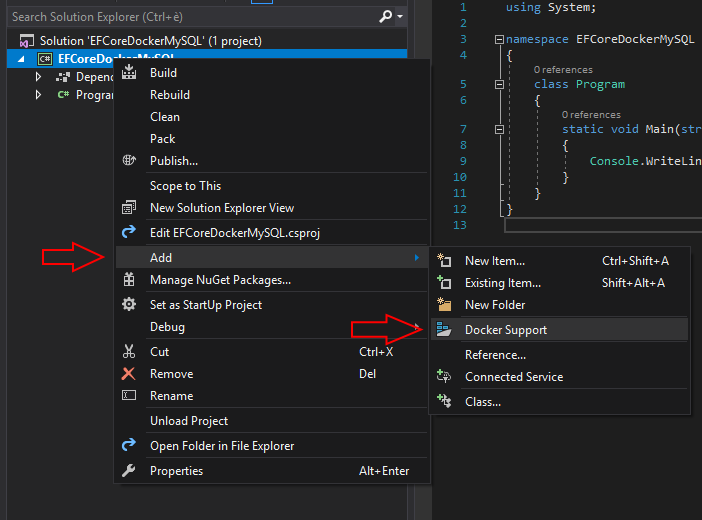 Doing that VS adds Dockerfile and .dockerignore files to the application project, and a new docker-compose project to the solution.

The Dockefile describes how the application container will be created.

source parameter used by the COPY command, which will be actualized during container building, defines which folder of the host filesystem containing the application have to be copied in the container. This variable allows to specify different behaviors whether the application is executed in release or debug mode.

.dockerignore file instructs Docker on which part of the host filesystem, based on the folder containing the Dockerfile, should be ignored, or considered (line starting with '!'), in the container build process.

docker-compose project, which is automatically set as StartUp Project, contains docker-compose.yml file. The latter defines the containers which have to be started when the application runs.

docker-compose.yml refers to the Dockerfile contained in the console project.

After building the application, and copying the compilation output in obj/Docker/publish/, thanks to the files described above, you can build and run the container from the command line just by typing the command docker-compose up (as shown below).

You can also forget about all those files and just build and run the application from VS. In order to do that, you just need to type F5 or select Debug -> Start Debugging. In this case, in addition to the file just described, VS uses some automatically generated files which allow to debug the application from the development environment. In order to discover where those files are and their content, you can look at the Output window of the Build process, and analyze the invocation of the docker-compose command.

After that, I added a MySQL container and I put it on the same virtual network of the application.

Declaring the network and assigning both containers to it, is fundamental in order to allow communication between them. Without this setting the containers will be started but, for example, the application will not be able to connect to the DB.

Then I added Entity Framework Core to the project by using the following command in the Package Manager Console:

I developed a simple data model and the DbContext of EF Core.

Before being able to actually use the data model, the table People has to be created in the DB. The efcoredockermysql database is automatically created at the container start up but, as you can simply check by looking into the mysql-data\efcoredockermysql folder, no table is created.

Even if the goal of the post is to introduce migrations, for the sake of simplicity, I decided to use a SQL script in order to create the table at MySQL container start up. In this way I can verify the correct behavior of the system before introducing more complexity with migrations. In order to do this I:

In order to check the effect of these changes, you can simply start docker, connect to the MySQL container with the bash, and use the mysql client to verify the content of the DB.

At this point, containers, DB and data model are ready. Then, I implemented an application to read and write the data in the database. In order to use EF Core 2.0 with MySQL I installed the NuGet package Pomelo.EntityFrameworkCore.MySql using the following command in Package Manager Console:

I used the Pomelo library because, as I am writing the post, the official package MySql.Data.EntityFrameworkCore is still not compatible with EF Core 2.0.

Starting the application from VS, in the Output window, you will see the following:

Note on the first execution: even if the depends_on has been used in order to specify that the application container has to start after MySQL container is started, the application could try to connect with the database before the latter is actually available. This can happen since Docker ensures that containers are started in the correct order but it cannot guarantee that the services contained within are up and running. There are several ways to ensure this but they are out of the scope of this post. If, at the first execution, the application has connection issues, you can run it again in order to solve the problem.

Once verified the correct behavior of the system, we finally get to the core of this post: using migrations. As it happens sometimes in software development, there is the need to step backwards in order to be able to keep going. In particular, I cancelled the changes described in paragraph DB initialization through SQL script in order to work with a clean database, i.e.:

Just to check that the DB is no more initialized, starting the application you should simply see the following error:

In order to use the .NET Core CLI for EF Core, first of all I installed the package Microsoft.EntityFrameworkCore.Tools.DotNet. For doing it, as described in this post, I manually modified EFCoreDockerMySQL.csproj adding the following line:

In order to avoid duplication of the connection string within the source of the application, I decided to use the standard JSON configuration files of .NET Core, i.e. the NuGet package Microsoft.Extensions.Configuration.Json. Then I modified the main method as shown below, and I added a configuration file.

Finally, before generating the first migration, I let the MySQL server be reachable from the host machine, that is the development one. To do this I changed the file docker-compose.override.yml and restarted the MySQL container.

By changing this file and not docker-compose.yml, I am sure that changes will not affect the release configuration.

Now that MySQL is reachable at localhost:3306, I added the following connection string to appsettings.json and changed the ApplicationDbContextFactory class in order to use it:

Once completed the arrangement described above, I opened the Package Manager Console and executed the following commands in order to create the first migration:

Doing this the CLI of EF Core created the following files:

The last two files have the same role that the migration related resource files had in Entity Framework.

Then I applied the migration to the DB by typing the following command in the Package Manager Console:

In order to verify that everything works correctly you just need to execute the application and look at the Output window.

This approach allows you to modify the data model and to align the DB schema by simply using the commands dotnet ef migrations add and dotnet ef database update of the CLI of EF Core. These commands are almost completely equivalent to those used with Entity Framework: Add-Migration and Update-Database.

.NET Core allows to develop light and multi-platform applications. Being able to correctly use it with Docker and MySQL allows to exploit the potential of this platform at its best.

I always found really useful the code first approach to manage data model and DB schema. In this post I shown how to set a project, and the development environment , up in order to directly use migrations of EF Core with MySQL. In this way you can use, during the development cycle, the same version of the database that you would use in production.

Furthermore, with this approach, thanks to Docker, you can use different versions of framework and database for each project, without even install none of them on the host computer.

There is much more to explore about EF Core, e.g. database seeding, how to deploy migrations in production, etc. Topics worth to be deepen in future posts.

The source code related to this post is available on GitHub. Below the configuration of the development environment:

Modeling and separation of concerns in functional programming

Aug 8, 2018
After my first experiment with functional programming, I decided to further study it in depth. Therefore, last March I attended “Lean and Functional Domain Modelling” workshop, organized by Avanscoperta, and held by Marcello Duarte. The workshop gave me good hints about functional modeling and fueled my curiosity to learn Scala and experiment more this paradigm. In order to tackle this challenge I studied and practiced a lot. After some months, and several discussions with Matteo Baglini, I have been able to put together the puzzle, and I wrote this post.

Jan 1, 2018
“What matters is the journey” (cit. Stefano Leli). This is the essence of Coderetreat. I discovered this format during Urbino’s Italian Agile Day 2017. During that event, I enjoyed practicing Test Driven Development (TDD) with other participants, and learning from the facilitators Matteo Vaccari, Stefano Leli and Gabriele Tondi. I liked the format so much that I decided to propose it in Florence, where I live, in order to let developers of my community to enjoy it and have fun together.

Event Sourcing and CQRS in C#

Jan 1, 2018
As promised in my previous post, in this article I examine practical aspects related to DDD and, in particular to CQRS and Event Sourcing patterns. The main goal of my experiment is to implement an aggregate according to the Event Sourcing paradigm, and to create a separate read model to feed the pages of a Web application. Before presenting the example, I am going to briefly introduce the main architectural patterns that have been used since DDD launch.

Nov 11, 2017
I was inspired to such an extent by Evans’ Blue Book, that I got passionate about Domain-Driven Design. I was still in the United States when, four months in advance, I registered to the Strategic Domain-Driven Design workshop held by Alberto Brandolini (aka ziobrando) and organized by Avanscoperta. I definitely wanted to attend. Then, taken from the day to day activities, I lost the sense of time, when mid-October, I received an email from Avanscoperta that reminded me of the upcoming course.

Oct 10, 2017
In this post I explain how to create a .NET Core 2.0 console application which reads, and writes, data from MySQL, and uses Entity Framework Core, and migrations, in order to persist data and manage the DB schema. Furthermore I will show how to use Docker to be able to develop the application independently by the chosen environment. In order to highlight the needed steps, I split the post in this way:

There and Back Again

Sep 9, 2017
For those who loves Tolkien, the title could seem uppish. After all, I traveled 7.600 km, much more than Bilbo and fellowship, I met people I could hardly understand, and I talked to a dragon… Ok, the latter is not true, but let me believe so 😃 Jokes aside, I spent the first six months of this year in Indianapolis, USA. In this period, I had the chance to appreciate how lively Indiana’s tech community is.

Aug 8, 2017
Every single experiment I did as a programmer began in this way: show Hello, World! on the monitor. Therefore I decided to start this new experiment (writing a blog) in the same way. Who knows me well can tell that I never did my best in humanities, therefore “writing a blog” is not exactly in my style. However, I strongly believe that sharing experiences is essential in my job for two main reasons: